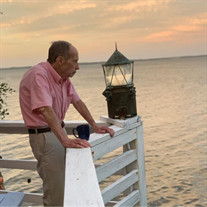 William Andrew "Bill" Morgan, the son of Henry Wilmer Morgan and Nannie Ruth Penn Morgan, was born on February 6, 1947. He made his mark on the world as a teacher and coach. For 39 years, 1973-1983 in Monticello, Georgia, and 1983-2012 at Franklin High School, Bill influenced many students. His players remember him with great affection and gratitude for the many ways he went beyond just being their coach. He was rewarded with knowing he was instrumental in helping many achieve successful college sports careers. Bill enjoyed his vocation but his number one priority was his family. He would drop everything at a moment's notice if asked to do something for them, especially if his grandchildren were involved. He loved getting unexpected calls from them asking for spur of the moment favors. Bill's love for Georgia Bulldogs football came a close second to his love of family. He might have even mentioned to God as he stepped into Glory that Georgia football kicks off on September 4. He enjoyed watching any sports on television. While he was definitely a meat and potatoes man and a picky eater, he surprised everyone by becoming a fan of The Food Network in recent years. Even though Bill tried to play the tough guy often saying to family and students, "Suck it up. You're all right", he owned a soft heart. Throughout the time he insisted he did not want dogs, the family always had one. The pups forgave him; and two, Sadie and Moky, both chose him as their favorite person. Bill, a member of Monticello Presbyterian Church, passed from this life on August 16, 2021. He is survived by his wife, Tryvonne M. Morgan; his children, Andy Morgan (Colleen) of Fletcher, NC, Greer Morgan of Franklin, NC, and Kelli Randall (Josh) also of Franklin; his grandchildren, Paiton, Deyton, Hank, Greylyn, Pennley, and Locklyn; his sister-in-law, Neala C. Morgan of Monticello; his nieces, Rachael Musquiz (Michael) of Texas, Esther Boedges (Greg) of Atlanta, GA; and the daughter of his heart, Amanda Tyler Crews also of Monticello; He was preceded in death by his parents and his brother, Richard Morgan. A celebration of life will be held at a later date. Memorial contributions may be made to: Franklin High School Athletic Department, 100 Panther Drive, Franklin, NC 28734 Moffitt Family Funeral Care is honored to serve Coach Morgan's family.

The family of William Andrew "Bill" Morgan created this Life Tributes page to make it easy to share your memories.