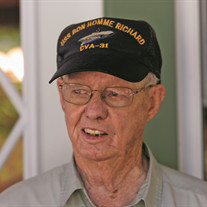 Buck Creek, NC - Richard Irving Bullis, known by his family and friends as Dick, was born on September 21, 1930, to James J. and Adelaide McKewen Bullis and passed from this life on December 13, 2020. Dick was known for being genuine and totally without pretense. He loved his country and did his patriotic duty by serving in the United States Navy during the Korean War aboard the USS Bon Homme Richard. He was a visionary who lived his motto: “You can’t steal second base with one foot still planted on first.” With a reputation built on honesty and integrity, he made his living as an advertising executive for the St Pete Times and had many successful ventures as a land developer. Music and wood carving were two of his passions. Dick’s musical talents included his ability to play piano, guitar, and drums. He loved and lived music, especially Big Band and Jazz, and never missed an opportunity to tune in to The Lawrence Welk Show. His ability to make something beautiful out of a block of wood was amazing. He was an award winning wood carver. He was of the Episcopal faith. Dick is survived by the love of his life, Jayne Carmody Bullis. Together, they celebrated their 64th wedding anniversary this year, a true testament to their love and devoted partnership in all things. Their daughter, Suzanne B. Main (Glenn); two grandchildren, Natasha L. Main and Brittney Main; three great grandchildren, Seth Wilson, Malia Helton, and Khyalee Dixon; his sister, Virginia Nelson, and several nieces and nephews also survive. Dick was predeceased by his parents and his brother, J. Peter Bullis. A Celebration of Life will be held at a later date in the Buck Creek community. Burial and military rites will be at the Western Carolina State Veterans Cemetery in Black Mountain, NC. Friday May 14, 11:00 AM. Don Moffitt will be the officiant in cooperation with the NC National Guard Military Honors. And in keeping with Dick’s favorite cause, Memorials may be made to, Shriners Hospitals for Children—Greenville, 950 W. Faris Road, Greenville, SC, 29605. Moffitt Family Funeral care is honored to serve Dick’s family. Online condolences may be made at www.moffittfamilyfuneralcare.com

Buck Creek, NC - Richard Irving Bullis, known by his family and friends as Dick, was born on September 21, 1930, to James J. and Adelaide McKewen Bullis and passed from this life on December 13, 2020. Dick was known for being genuine and totally... View Obituary & Service Information

The family of Richard Irving (Dick) Bullis created this Life Tributes page to make it easy to share your memories.