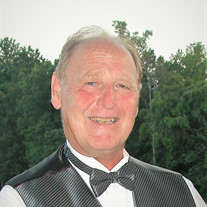 Ralph Jacob Provost, who passed from this life on May 27, 2021, didn't fit anyone's mold except his own. He never started slowing down and took advantage of every living moment he had. Ralph, born on September 6, 1952, to Albert and Joyce Chambers Provost, was a devoted family man. He and his wife, Joan (Jo) Edgerton Provost, built a life that included two sons and three grandchildren. He loved being involved in his sons' lives and enjoyed being with them. He also took great pleasure in being active with his precious grandchildren. From coaching teams when his boys were young to planning for the next year's Thanksgiving holiday as soon as dinner was finished, he was all about family. Ralph celebrated his retirement from a job requiring monotonous bland clothing by acquiring a great wardrobe that included bright colored sports coats and socks that almost glowed in the dark. Even though his wife, Jo, might have grinned and suffered through it, there are doubts she ever did totally appreciate the turquoise sports coat or seersucker suit he often wore. Jo was such an important part of Ralph's life. He was very proud of her and loved to brag about her and her accomplishments. He was the main supervisor of whatever project she was working on. Together they loved watching Jeopardy while Ralph matched wits with the contestants, answering almost all of the questions correctly. Ralph enjoyed reading, especially books by John le Carre. He loved his dog, George, liked to play pickle ball, listen to James Taylor or Pachelbel's Canon in D, and ride motorcycles. Ralph rightfully named his motorcycle Xanax since riding it was relaxing and so much fun. Ralph, who was a member of Dryman's Chapel United Methodist Church, had qualities worth striving for. Integrity, generosity, concern for others, love of family, and a great sense of humor were his trademarks. Left with many wonderful memories are his wife, Jo; his sons, Jacob Lee Provost (Corinne) of Laguna Beach, California, and Jesse McAulay Provost (Kerri) of Franklin, NC; his grandchildren, Jocelyn, Arley, and Chase; his brother, Tom Provost, of Rock Hill, SC, and several nieces and nephews. He was preceded in death by his parents and two sisters, Judy and Ann. Moffitt Family Funeral Care is honored to serve Ralph's family.

Ralph Jacob Provost, who passed from this life on May 27, 2021, didn't fit anyone's mold except his own. He never started slowing down and took advantage of every living moment he had. Ralph, born on September 6, 1952, to Albert and Joyce... View Obituary & Service Information

The family of Ralph Jacob Provost created this Life Tributes page to make it easy to share your memories.