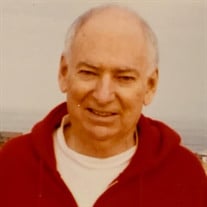 Glenville, NC: LEON YAUN peacefully left this earth to be with his Maker March 3rd, 2021. Leon was born in Memphis, Tennessee to Samuel Leon Yaun and Anna Anita (Swift) Yaun, December 11, 1928. From an early age Leon's artistic talent was evident when his fourth grade soap carving of the Parthenon was selected to be exhibited at the Brooks Memorial Art Gallery in Memphis. Growing up, he spent many summers in the City of New Orleans, Louisiana and loved its bayou country. These experiences would become the subject of much of his early art work. He graduated from Subiaco Academy college preparatory school in Arkansas and as a young adult pursued his studies at Memphis Academy of Art, where many of his paintings were on display. Leon moved his young family to Connecticut where he pursued a career in the furniture industry. He was head of quality control for Jens Risom Furniture in their Connecticut Plant. A loving father of four, he spent many happy hours playing with his children at the beach. Even with the responsibilities of a family, he managed to become an active member of the Mystic Art Association of Mystic, Connecticut. He also exhibited at the Slater Museum Gallery in Norwich, Connecticut. As his children matured and started families of their own, Leon became interested in the world of antiques and was able to incorporate his new found interest into his love of art and wood working. He exhibited his collections of antique bottles and Americana regionally and became well known in the area. Leon remained closely involved in his children and grandchildren's lives as their families grew. With the harsh New England winters, Leon began spending much of the winter months in Florida. In 1981 Leon was introduced to Hazel Giles, a fellow antique exhibitor with two young children. In 1982, Leon moved to Florida and he and Hazel began their lives together. When the children started college, Hazel and Leon moved to the North Carolina Mountains to the little community of Glenville where Leon spent the remainder of his life. He spent countless hours painting and carving and exhibiting his work at Folk Fest in Atlanta, Georgia, the Nation's largest folk art festival at that time. His work is held in collections all over the South and North East. He remained close to his New England family and visited every summer until he was no longer able to travel. He was also especially close to Hazel's children, grand children and great grandchildren, who he treated as his own. They shared many holidays and summers in the mountains. Leon is survived by Hazel Giles, his life partner of 38 years; his sister Carol Richardson of Salisbury, Maryland, and her husband Wayne Hancock, nephews Wade Richardson of Greenville, South Carolina and Wesley Richardson of Del Mar, Maryland; his half-brother, Eddie Yaun of Germantown, TN.; his son, Todd Yaun and his children Derek Yaun and Luke Yaun of East Woodstock, Ct. and Iris Anna Gohn (Yaun) of Tucson, Arizona; his daughter, Rory Lynch (Yaun) of Petersburg, NY and her children Clove Lynch of Boulder Colorado and Mimosa Lynch of Munich, Germany; daughter Jennifer Yaun Rainey (Tom) of Brooklyn, Ct. and her children Travis Harwood of Plainville, Ct. and daughter Venessa Harwood Perry ( Ronald), of Middletown, CT.; daughter, Leslie McClellan of Dayville, Ct. and her children Evan McClellan and Nathan McClellan; Stepdaughter, Lynn Giles Herrera and her children, Megan Herrera Cartwright (Mike) of Milton, Delaware, Rebecca Herrera Joga (Matthew) of Beaufort, SC and Brittany Herrera of Montclair, NJ.; Stepson, James Giles and wife Kristina of Rockville, Md. and their children, Christopher John (CJ) Giles and Kaitlin Rose (Katie) Giles of Rockville, Md. and 13 great grandchildren. Everyone who met or knew Leon was impressed by his kind, gentle humor and immense talent. He was indeed a very special gift on loan from God. Moffitt Family Funeral Care is honored to serve Leon's family. Online condolences may be made at www.moffittfamilyfuneralcare.com

The family of Leon Yaun created this Life Tributes page to make it easy to share your memories.

Glenville, NC: LEON YAUN peacefully left this earth to be with...