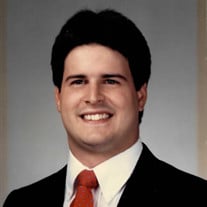 Larry Dean Hollifield was born December 25, 1968, in Morganton, NC to Guy E. Hollifield (Joyce) and Glenda Murphy Buss (Wally). He was preceded in death by his grandparents, Edward Hollifield, Dorothy Hollifield, and Otis Murphy. Larry attended Western Carolina University, graduating with two Bachelors degrees. He was a member of Alpha Kappa Psi, known as the oldest and largest business fraternity with its mission of developing its members into principled business leaders. He was self-motivated, founding a successful business, American Computer Sales and Accounting in 1991, when he was only 22 years old. He maintained ownership of his business until his passing on August 7, 2021. Larry, who was civic minded, was a member of the Macon County Planning Board for seventeen years. He truly enjoyed helping others and was an member of Rotary for over twenty years, serving a term as president. Larry was very active in the Rotary sponsored RotoKids. Larry was never just about work. He loved hunting and fishing whenever he could. Listening to 80s music and "BS-ing" with good friends were also perfect ways for him to pass time. Larry is survived by his spouse, Suzanne Lynn Harouff, and his parents. Also surviving are his children, Tyler Hollifield and Thomas Hollifield, both of Franklin; his step-son, Sgt. First Class Christopher Holland (Brittany) of El Paso, Texas; his step-grandchildren, Benjamin Holland and Lucas Holland also of El Paso; his grandmother, Ruth L. Murphy, of Morganton, NC and, a number of half brothers. A memorial service will be held at a later date. Memorials in Larry's honor may be made to Rotary Club of Franklin, P.O. Box 375, Franklin, NC 28744 or CarePartners Hospice, 170 Church Street, Franklin, NC 28734. The family requests all condolences being sent via USPS to: Moffitt Family Funeral Care, c/o Hollifield Family, 668 Highlands Rd, Franklin, NC 28734 Online condolences may be made at www.moffittfamilyfuneralcare.com Moffitt Family Funeral Care is honored to serve Larry's family.

The family of Larry Dean Hollifield created this Life Tributes page to make it easy to share your memories.