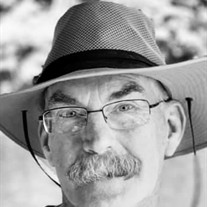 If humans can cross over the Rainbow Bridge on their way into Heaven, Kenneth (Ken) Alter crossed it on July 22, 2021 and had the most joyful reunion with all the dogs and cats that he had ever rescued, cared for, groomed and loved during his time on earth. Born in Dallas, Texas, on July 15, 1957, he was the middle son of Scott and Marie Alter. When Scott passed away from cancer in the mid-1960's, Marie and her three Alter Boys relocated back to her parent's hometown of Bradford, Pennsylvania. In Pennsylvania, Ken and his brothers thrived and played in the beautiful hills and waters of the Allegheny National Forest. When he wasn't enjoying the wild outdoors, Ken attended St. Bernard Elementary School and graduated from Bradford Central Christian High School in 1976. Carrying a strong work ethic throughout his life, Ken labored in the Pennsylvania oil fields and later served Witco/American Refining Group in its Bradford refinery. Ken and his first wife, Denise Alter, were blessed with one daughter, Nicole, who inherited so many of Ken's wonderful qualities: Love of dogs and cats, cars, outdoor fun, caring for others, a quick willingness to help anyone in need and a delightful, albeit quirky, sense of humor. One thing Nicole did not inherit was Ken's unsurpassed moustache. This became his trademark and stayed with him to the end of his valiant battle with carcinosarcoma. Ken met his second wife, Paula Johnson Alter, in early 2001. It's likely that Ken's late maternal grandfather and Paula's late paternal grandfather had a hand in steering destiny. Soon after they started dating, they learned their grandfathers had been best friends and shared a mutual love of raising horses. On July 11, 2001, Ken asked Paula to marry him. After she said yes, he took her outside and pointed to the abundantly starry sky saying "Our parents had them turn on all the lights for us tonight". Ken and Paula married later that year on November 23 and celebrated their love and commitment in the presence of God and family during a candlelit ceremony at their home. Soon after their marriage, Ken, with part-time assistance from Paula, launched Alternative Expressions Studio specializing in photography and graphic design. His calm, friendly demeanor and creativity made him a popular portrait, pet, wedding and industrial photographer in the Bradford area. When Paula accepted a healthcare leadership role in Franklin, Ken happily followed her to the Great Smoky Mountains. He later assisted Dan Andrews in opening Paula's Pet Paradise where he enjoyed grooming and playing with pets, along with scooping pet poop, until his retirement due to cancer in May of this year. Along with enjoying their mountaintop scenic views, Ken and Paula spent many happy days on their pontoon boat, the "K-9 Cruiser", at Fontana Lake. Ken skillfully rebuilt their boat from the deck up, and enjoyed finding new coves for his beloved morning and afternoon naps. They were always accompanied by three or four canines and their lake escapades brought smiles to many. As his health declined in the final weeks, Ken was treated to a final pontoon boat ride and conversation with his special marina buddies at Almond Boat Dock & RV Park. Ken is survived by his wife of nearly 20 years, Paula Johnson Alter; daughter, Nicole Alter (Katelyn Sherwin) of Bradford, PA; brothers Tom Alter (Kathy) of Independence, Kentucky, and Jim Alter (Marcia) of Willow Springs, NC; several nieces and nephews; first wife, Denise Alter, of Bradford, PA; good friend and brother-in-law, Tom Johnson, of Franklin, NC; and his precious fur children. All who were blessed to know Ken will greatly miss him but also rejoice in his complete heavenly healing. In accordance with Ken's wishes, his family will privately remember him with love and laughter at his and Paula's mountaintop retreat and surrounded by their adoring fur children. If you would like to honor Ken's love for pets, please consider a donation in his memory to one of these very deserving and "impawtant" pet charities: Advocates for Animals of WNC (www.a4awnc.org), Appalachian Animal Rescue Center (851 Lake Emory Rd., Franklin, NC 28734) or Noah's Ark Humane Society (1239 Old Murphy Rd., Franklin, NC 28734). Moffitt Family Funeral Care is honored to serve Ken's family. Online condolences may be made at www.moffittfamilyfuneralcare.com

If humans can cross over the Rainbow Bridge on their way into Heaven, Kenneth (Ken) Alter crossed it on July 22, 2021 and had the most joyful reunion with all the dogs and cats that he had ever rescued, cared for, groomed and loved during his... View Obituary & Service Information

The family of Kenneth James Alter created this Life Tributes page to make it easy to share your memories.

If humans can cross over the Rainbow Bridge on their way into...