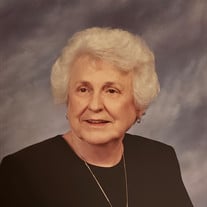 Even at 90 years old, Joyce Cassada Bryant kept the twinkle in her eyes and her easy going way of making and keeping friends. Born in Clay County on November 14, 1930, Joyce came to Franklin, started from scratch, and was able to make a name for herself in Macon County. Joyce began her career when she was employed at Calvin Henson Real Estate. Her ability to connect with people prompted Mr. Henson to encourage her to further her career by becoming a broker. Joyce obtained her brokerage license and built a good reputation, working only on referrals. Her most famous customer was Larry Csonka of the Miami Dolphins and, was resident broker for Mr. Csonka and fellow Dolphin, Jim Kiick, for their Riverbend land development. She continued in real estate during her working years, eventually retiring from DeSoto Trail Realty. Joyce was active in her community, serving as a PTA officer at Franklin Elementary School, as a Den Mother for the Boy Scouts of America, as secretary of Little League Baseball, and as three time president of the High Hopes Garden Club. She was honored by Lady Bird Johnson’s Rural Beautification Project as a top award recipient and was invited by Governor Dan Moore to Raleigh to the recognition banquet. A member of First Baptist Church of Franklin, Joyce was a woman of faith and a prayer warrior. Her favorite passage from the Holy Bible was Psalm 23. Joyce absolutely adored her family. She was blessed not only with her husband and son, but also grandchildren, great-grandchildren, and great-great grandchildren. Toward the end of her life, she enjoyed a special relationship with her caregiver, Joel, and doted on her cat, Cassie. Joyce, who passed on January 11, 2021, is predeceased by her husband, Henry Cullen Bryant; her parents, Hardy Frank and Rose Hogsed Cassada; and her siblings, Frankie Ledford, Blaine Cassada, Neal Cassada, Lillian Thomas, and James Cassada. Left with many wonderful memories are her son, Henry Cullen (Tony) Bryant, Jr. (Gloria); her grandchildren, Jennifer L. Bryant (Eric), Matthew C, Bryant (Cori), and Joshua A. Bryant (Tamara); her great-grandchildren, Kelsey L. Trombatore, Andrew C. Bryant, Ian S. Bryant, Marisa L. Bryant, Alec Parthe, Braelyn H. Bryant, and Tallulah J. Bryant; and her great-great grandchildren, Magdelina Trombatore and Adriana Trombatore. Several nieces and nephews also survive. Presently, a private graveside service will be held at Woodlawn Cemetery and a Celebration of Life will be held at a later date. In lieu of flowers, memorial gifts may be made to either St Jude's Children's Hospital or Habitat for Humanity. Moffitt Family Funeral Care is honored to serve Ms. Joyce's family. Online condolences may be made at www.moffittfamilyfuneralcare.com

Even at 90 years old, Joyce Cassada Bryant kept the twinkle in her eyes and her easy going way of making and keeping friends. Born in Clay County on November 14, 1930, Joyce came to Franklin, started from scratch, and was able to make a name... View Obituary & Service Information

The family of Joyce Cassada Bryant created this Life Tributes page to make it easy to share your memories.

Even at 90 years old, Joyce Cassada Bryant kept the twinkle in...