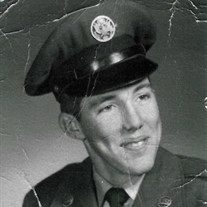 Joseph "Mule" Tallent spent almost 83 years on Earth. Born on April 22, 1939, he passed on to Glory on April 9, 2022. He was the last of his family, having been preceded in death by his parents, Harry and Mary Gray Tallent, and his brothers, Bill Tallent and Ralph Tallent. Joe and his wife, Ellen Pearl Armstrong Tallent, who passed July 11, 2012, had three children, Joanne Tallent (Donnie), Karen Tallent, and Ricky "Ribs" Tallent who they adored. Their precious grandchildren, Jonathan Owens, Heather Gragg, Ashley Fort, (Traylon), Gabi Tallent, and Sam Tallent, along with their great-grandchildren, Kaydence Fort, Brooklyn Allen, Kennedy Grace Gragg, and Peyton Ellen Owens, were the icing on the cake. Joe was a character. He loved to talk and never met a stranger. He was an entertainer, full of tall tales and, as we say in the country, "BS". He had a sharp mind, seeming as if he knew everybody and how they were related. He enjoyed being with people and his outgoing personality drew them to him. He truly was a people person. Family was very important to Joe, and he always was involved in his kids' lives. When they were young, he and his wife coached youth basketball. As they grew older, he enjoyed helping Ricky with his race car and doing whatever he could for his girls. His grandchildren absolutely adored Joe, and it was mutual. Despite his reputation for stretching the truth, Joe had one very true story about being struck by lightning. That, however, did not keep him from his love of the outdoors. He enjoyed fishing and camping and worked hard every year, planting a big garden. He always had horses and other farm animals, which gave him another reason to be outdoors. Joe was a veteran who served in the United States Air Force as a firefighter. His CB handle, Fix It Man, described his love to tinker and repair whatever needed fixing. He was always available to family and friends. Joe is survived by his children, grandchildren, great-grandchildren, and several nieces and nephews. A Celebration of Life will be held at 2:00pm, June 18, 2022, at Joe's residence. Moffitt Family Funeral Care is honored to serve Joe's family.

Joseph "Mule" Tallent spent almost 83 years on Earth. Born on April 22, 1939, he passed on to Glory on April 9, 2022. He was the last of his family, having been preceded in death by his parents, Harry and Mary Gray Tallent, and his brothers,... View Obituary & Service Information

The family of Joseph "Mule" Tallent created this Life Tributes page to make it easy to share your memories.