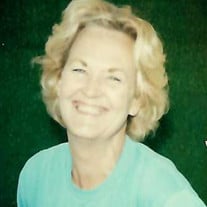 After a five-year battle with dementia, Joanne Bentz Baro (aka Memaw to not only her family but so many she embraced as extended family and friends ) went Home to be with the Lord on October 19, 2020 at her home in North Carolina, surrounded by her husband, Anthony Baro, her daughter Becca Baro and her granddaughter, Tawny Perez. Also present were her dogs: Shasta, Little, Lucky and Leo. Joanne is survived by her husband, Anthony Baro, son, Anthony Baro, Jr., Becca Baro; and three grandchildren, Anthony Baro III, Tawny and Johnny Perez. Joanne was born on November 1, 1945 in Miami, Florida to Dorothy and Bob Bentz, who Predeceased her along with her sister Dot Young (aka Aunt Sister). Joanne married Anthony Baro on July 13, 1962. They began their marriage in Miami, Florida and moved as the Air Force warranted to Lakeland, Florida, Texas and Mississippi and moved back to Miami after her husband completed service in the Air Force. During those four years Anthony Baro, Jr was born. After returning to Miami, Joanne and Anthony partnered 58 years in raising their children, as well as were always deeply involved in raising their grandchildren. In addition, Joanne supported her husband in three businesses always by his side and as the children grew they too were involved. Joanne always had an open-door policy to their home to anyone and everyone who needed - which included through the years 17 dogs of which 13 welcomed her Home to Heaven. In 2001 Joanne and Anthony moved to North Carolina to care for her mother who had Alzheimer’s. With time her daughter and grandchildren followed. Joanne wrote in a paper for Elementary School On Who She Admired: ‘If I were to choose whom I admire, I would choose my mother. I have always wanted to be like my mother’. Joanne exceeded her desire to be like her Mother in the unconditional love, encouragement, and hospitality she was known for. If there was but a few words to define Joanne - it would be ‘Infectious, contagious love for everyone she met’. Joanne is dearly missed and will never be forgotten. Her legacy for all who loved and knew her will be to love and love deeply. 1 Corinthians 13:13 ‘And now these three remain: faith, hope and love.But the greatest of these is love.’ Moffitt Family Funeral Care is honored to serve Mrs. Baro's family. Online condolences may be made at www.moffittfamilyfuneralcare.com

After a five-year battle with dementia, Joanne Bentz Baro (aka Memaw to not only her family but so many she embraced as extended family and friends ) went Home to be with the Lord on October 19, 2020 at her home in North Carolina, surrounded... View Obituary & Service Information

The family of Joanne Clark Baro created this Life Tributes page to make it easy to share your memories.

After a five-year battle with dementia, Joanne Bentz Baro (aka...