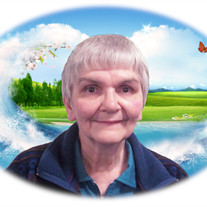 Janet Marguerite Hair (nee Strout), 78, of Franklin, NC, peacefully passed away Thursday, March 11, 2021 at Accordius Nursing Home in Hendersonville, NC. Janet was born in Sanford, Maine. She was the daughter of the late Arnold and Marguerite Wilson Strout. In addition, Janet was preceded in death by her husband Richard in 2008 and a niece, Rebecca Strout Miller in 2009. Janet graduated from High School in Yarmouth, Maine and attended Gray Business School in Portland, Maine and Husson College in Bangor, Maine. Janet was born with cerebral palsy, but that did not hinder her in any way. She always found a way to get around and get it done in her own special way. Janet was a long-time volunteer for Angel Medical Center in Franklin, NC, assisting others with their medical paperwork and medications. This is where she made a special long-time and lasting friendship with Sheila and David Frank - thank you specifically to Sheila for everything you did for Janet. A special thank you also to neighbors Marion Shuler and her daughter, Susan, who went out of their way to look in on Janet and particularly during her hospitalization, they took care of Janet's property. Janet accepted the Lord as her personal Savior at an early age. She loved to pray and praise the Lord. Her favorite program was the Jimmy Swaggart Wednesday Night Bible Study. Immediately following each study session, she loved to call her brother, Roger, and her sister-in-law Joanna and review the lesson at length. She loved to talk about heaven and would often say, "When I get to heaven, the first thing I want to do is RUN!" She was never able to run here on this earth, but today, she is running... She is survived by her brother, Roger and his wife, Joanna, one nephew, David (Hillary) and one sister, Ellen, her husband, Herb, and their children Amanda and Elizabeth. Arrangements are pending. Moffitt Family Funeral Care is honored to serve Ms. Janet's family. Online condolences may be made at www.moffittfamilyfuneralcare.com

Janet Marguerite Hair (nee Strout), 78, of Franklin, NC, peacefully passed away Thursday, March 11, 2021 at Accordius Nursing Home in Hendersonville, NC. Janet was born in Sanford, Maine. She was the daughter of the late Arnold and Marguerite... View Obituary & Service Information

The family of Janet Marguerite Hair created this Life Tributes page to make it easy to share your memories.