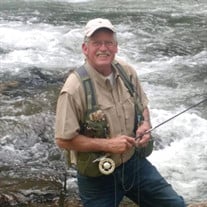 FRANKLIN, NC – James William (Bill) Fuchs, 71, devoted husband, father of two, passed away January 8, 2021 after a brave battle with Cancer. He was born March 11, 1949 to Fred and Barbara Fuchs of Homestead, Florida. Bill’s first grade report card described his personality best: “He is a great student, but he must S-L-0-W down!” Slow down, he did not! He had an intense zest for life. Even during the throes of Cancer, he managed to continue travels to Africa, Costa Rica, Alaska, the Amazon, and his treasured Wyoming. He never wanted to “burn daylight”. He was known for his folksy, humorous expressions – some could be repeated and some should not, but many will be remembered by all who knew him. Bill’s love for adventure was deeply ingrained. He came from a family of world travelers, nature lovers, outdoorsmen, agriculturists, and horticulturists. Bill was a 1967 graduate of South Dade High School in Homestead, Florida where he was Senior Class President, a track and football athlete, a natural leader – charismatic and well liked. He loved growing up in South Florida, enjoying the ocean, with its beautiful Coral Reefs, and the wonders of the Everglades. It was while diving on the Coral Reefs that he had an accident that left his left hand with only 3 fingers. That injury never limited him. In a matter of seconds, he could intricately tie a beautiful Adams Dry Fly while sitting at his fly tying bench. His “special” hand was a favorite to hold by his children and grandsons. Ultimately, Bill became an award winning taxidermist, creating beautiful wildlife art with those unique hands. Bill graduated from the University of South Alabama where he “majored” in hunting and fishing and minored in Biology and Chemistry. He was also a member of Sigma Tau Kappa. It was in Mobile, Alabama where he met the beautiful Linda Jane Johnson who became the devoted love of his life for 47 years. If time allowed, Bill spent it in the woods or on the water and always wanted his best friend, Linda, by his side every step of their life together. After graduation from college, Bill taught Biology and Chemistry and was also a noteworthy football coach at McGill-Toolen Institute in Mobile, Alabama. In 1978, Bill and Linda moved from Mobile to Franklin, North Carolina where they purchased his Grandfather and Grandmother Williams’ summer home. Growing up, he, his siblings, and cousins had enjoyed their vacations at this home. Bill’s first jobs in Franklin were teaching at L.B.J. Job Corps and holding an adjunct faculty position at Western Carolina University. While teaching and farming, he and Linda started what would become their life’s work: Wilderness Taxidermy and Outfitters, later to become the largest taxidermy and outfitting business in North America. Bill was passionate about adventure and wanted to encourage everyone he met to explore new places, the outdoors and, of course, hunting and fishing. He was a master salesman and by the time you finished listening to him you were ready to “get in the game of life” or buy whatever it was he was selling. He was unapologetic when it came to his conservative political views, Alabama football, and the conservation and preservation of hunting and fishing for future generations. There will never be another Bill Fuchs, JW, Billy, Fuchs, or Wild Bill. However, his legacy will be in all those who have met him and were inspired to enjoy God’s natural creations and not take this life for granted. He loved life and lived it fully. Bill is preceded in death by his parents Fred Fuchs Jr. and Barbara Williams Fuchs of Homestead, Florida, and his brother Charles (Judy) Fuchs also of Homestead, Florida. He is survived by his beloved wife, Linda Jane Fuchs of Franklin, NC; daughter Corie Fuchs (Chris) Carr, grandsons Colton and Cooper Carr of Mooresville, NC; son Jason Fuchs and grandson Bryton Fuchs of Missoula, MT; his brothers Robert (Michael) Fuchs of Homestead, FL; Richard (Linda S.) Fuchs of Jacksonville, FL; sister Susan (Rhonda) Fuchs of Chattanooga, TN and many nephews and nieces. A Celebration of Life will be held May 27, 2021 from 3:00 - 6:00 pm at The Parker Mill, 612 E Hampshire Blvd., Whittier, NC. 28789 Thank you to our community and all who have stood with us in prayer and support. Moffitt Family Funeral Care is honored to serve Bill's family. Online condolences may be made at www.moffittfamilyfuneralcare.com

The family of James William (Bill) Fuchs created this Life Tributes page to make it easy to share your memories.