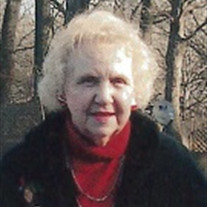 Irene Vinson "Rene" Speed, 93, of Franklin went home to be with her Lord and Savior, Jesus Christ, on Wednesday, March 3, 2021. She was surrounded by her family the weeks prior to her passing. Irene was born in Otto on September 28, 1927 to the late Laura Bell and Sylvester Vinson. She was married to Harold "Papoo" Speed, her true love, for 45 years who died in October of 1993. There is a great heavenly reunion taking place as she is now able to see all of her loved ones that went on before her. She was very proud of her heritage loved talking about her large family and the good times growing up on the family farm. Irene was of the Baptist faith remained a faithful and active member of Riverbend Baptist Church (Formerly Faith Baptist Church) as long as her health permitted. Even when she was unable to attend she prayed and read her Bible often. If fact, she was the oldest surviving member and last living charter member of the church. She had prayed for a church in her community for many years; she loved her Church dearly. She set the example on how to live a Godly life. Everyone that grew up around her can remember her quoting scripture to them and offering advice. One of her most common phrases was, "You have to be kind and good to everyone." She was the epitome of "Love is Patient, Love is Kind." Irene retired from Belden after 30 years of working in the Franklin facility. She loved her work there and the people there were like a second family to her. Rene was full of life and loved to laugh and have fun. She also liked to spend time with family, shop, and visit friends and relatives. Included in this would be spoiling her grandchildren and great grand-children. When asked "Rene, you going with us?" a quick reply would be, "You're not going without me." She also loved to go on rides, travel, picnic, fish, and be outside. She loved the fall, winter, snow, birds, apples, holly with berries, and especially Christmas! She was an avid fan of all the Christmas movies, especially Christmas Vacation. She was a night owl and loved watching the Atlanta Braves, Dallas Cowboys, Golf, College Basketball, David Letterman, Jackass, and Iron Chef to name a few. Her food was second to none as her whole family can attest too. Around the holidays it would not be unusual for her to bake five or six cakes from scratch as well as the full dinner. In fact, every weekend at her home was like a holiday with people, food, ballgames, and good times. It was common to have a full house on the weekend. Later in life, as we began to care for her and keep these traditions alive she never passed up anything new. She could hold her own eating Buffalo wings which became one of her favorites. Rene is survived by a daughter, Carol Ann Speed Sanders, two grandchildren, Russell Sanders and wife Tina and Rodney Sanders and wife Renee; five great grandchildren, Nathan Sanders, Katie Sanders, Nicholas Sanders, Luke Sanders, and Emily Sanders; a granddaughter in law, Laura Widner Sanders; one sister, Joanne Cabe (Edwin); three brothers, Ray Vinson (Linda), James "Jim" Vinson (Nancy) and Jerry Vinson (Dora Ann) and numerous nieces, nephews and cousins that she loved dearly. In addition to her parents and husband, she is preceded in death by one grandson, Ryan Sanders; one son in law, Roger Sanders; five sisters, Lucille Moffitt, Betty Sue Elvis; Roberta Welch, Hazel Brookshire, and Dorothy Sosebee and two brothers, Edwin Vinson and Max Vinson. She is also preceded by several nieces and nephews. A funeral service will be held on Tuesday, March 9, 2021, at 11:00am at Riverbend Baptist Church with the Reverends Roy Lowe and Brian Holland officiating. Burial will follow at Highlands Memorial Park. Rodney Sanders, Russell Sanders, Nathan Sanders, Luke Sanders, Nicholas Sanders, James Farrish, and Jason Rogers will serve as pallbearers. Katie Sanders and Emily Sanders will serve as honorary pallbearers. The family will receive friends from 10:00am until 11:00am prior to the service. In addition, Mrs. Speed will lie in state at the church on Monday evening, March 8, 2021 from 4:00pm until 7:00pm should anyone want to stop by the church. The family would like to thank the folks who helped take care of her when she went to Grandview Manor. The family would also like to especially thank Moffitt Family Funeral Care for their assistance during this difficult time. Crisp Funeral Home is assisting the family with arrangements.

Irene Vinson "Rene" Speed, 93, of Franklin went home to be with her Lord and Savior, Jesus Christ, on Wednesday, March 3, 2021. She was surrounded by her family the weeks prior to her passing. Irene was born in Otto on September 28, 1927... View Obituary & Service Information

The family of Irene Vinson "Rene" Speed created this Life Tributes page to make it easy to share your memories.

Irene Vinson &quot;Rene&quot; Speed, 93, of Franklin went home to be with...