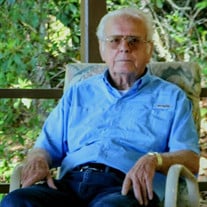 Harvey Len Peacock was born on August 30, 1930, in St. Petersburg, Florida, to James Dewey and Rinnie Kate Adcock Peacock. Harvey was a veteran, serving in the United States Army during the Korean War. Harvey had a 35 year tenure with Florida Power serving as the general line superintendent at Florida Power’s largest satellite office. He had the ability to repair almost anything and was always willing to help others even if he found it difficult to accept help for himself. He was never happy sitting on the sidelines since he was a “doer” at heart. Harvey lived an extraordinary life. A member of First Pentecost Church in Franklin, NC, Harvey was definitely a child of God. The way he lived was a testimony that he loved and served his Lord Jesus. He was a member of a Bible study group while he was able to attend and read and studied the Bible daily. His love and loyalty to his family will long be remembered. Harvey was a deep thinker who wasted very few words. He was faithful, reliable, and tough. Harvey loved road trips, especially through the Nantahala Gorge and to Gainesville, GA, via all the backroads through the small towns. Harvey was a “pig” on a mission. All who knew him best knew exactly when Harvey would stop. His main goal for the road trips was to stop for lunch at PRECISELY 12:00 or for dinner at PRECISELY 5:00. A clock could be set with Harvey’s stomach. In his spare time, Harvey enjoyed woodworking and golf. He also raised and trained hawks. He called his favorite hawk “Slewfoot” because it had a broken leg at the time he rescued it. Harvey went on to Glory on December 31, 2021. He is survived by his wife of 61 years, Carolyn Sellers Peacock; his son, David Peacock and spouse Jo Lynn of Franklin; his grandchildren, Alicia Nicole Peacock and Chelsea Ray Cerisoli; his step-grandson, Nazir Tavlan; and his great-grandson, Lincoln Zane Peacock. He was preceded in death by his parents, a brother, and three sisters. A Celebration of Life will be held February 21, 2022, at First Pentecost Church starting at 2:00pm, including the VFW/American Legion Honor Guard. Memorial contributions may be made to: Tunnel to Towers Foundation 2361 Hylan Blvd. Staten Island, NY 10306 Moffitt Family Funeral Care is honored to serve Harvey's family.

Harvey Len Peacock was born on August 30, 1930, in St. Petersburg, Florida, to James Dewey and Rinnie Kate Adcock Peacock. Harvey was a veteran, serving in the United States Army during the Korean War. Harvey had a 35 year tenure with Florida... View Obituary & Service Information

The family of Harvey Len Peacock created this Life Tributes page to make it easy to share your memories.