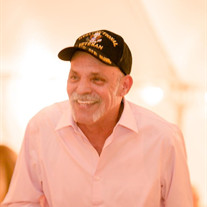 Franklin, NC: It is with great sadness that the family of Eduardo (Eddie) A. Garcia, Jr., announces his passing on April 24, 2021. Eddie, born on November 12, 1957, to Eduardo Garcia-Rodriguez and Belen Garcia-Arbona, was a retired postal worker and a veteran of the United States Army. The U.S. Postal Service was important to Eddie not only because of his job, he also met the love of his life, Diana, at the post office. Married for 38 years and the parents of three daughters, Eddie will always be remembered as a very giving family man. He made sure their house was filled with laughter and remained a big kid at heart. It could be said Eddie was his own man as he was not dependent on the approval of others. He enjoyed coaching his girls and was willing to help other players whether or not they were on his team. Second to his family was his passion for fresh water fishing. He also loved animals and provided a home for iguanas, turtles, and dogs throughout the years, his favorite being a service dog basset hound named Izzy. Eddie attended St. John's Episcopal Church and loved being a part of that very special church family. His own family will remember Eddie, sitting on the porch of his mountain home, smoking his stogie. Left with many wonderful memories are his wife, Diana Lee Lamb Garcia, of Franklin and his daughters, Cheryl Salerno (Andrew), Danielle Velazco (Rodrigo), and Erika Cann (Evan) all of Concord, NC. Four grandchildren, Cruz Eduardo, Everly Skye, Jackson Eduardo, and Leon Alejandro; four siblings, several nieces and nephews, along with many dear friends also survive. Eddie was predeceased by his parents. A Celebration of Life will be held at a later date. In lieu of flowers, donations in Eddie's name may be given to Alzheimer's Association, 225 N. Michigan Avenue, Floor 17, Chicago, IL, 60601. Moffitt Family Funeral Care is honored to serve Eddie's family.

Franklin, NC: It is with great sadness that the family of Eduardo (Eddie) A. Garcia, Jr., announces his passing on April 24, 2021. Eddie, born on November 12, 1957, to Eduardo Garcia-Rodriguez and Belen Garcia-Arbona, was a retired postal worker... View Obituary & Service Information

The family of Eduardo (Eddie) A. Garcia, Jr. created this Life Tributes page to make it easy to share your memories.

Franklin, NC: It is with great sadness that the family of Eduardo...