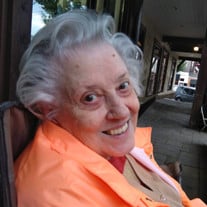 Mrs. Dorothy (“Dottie”) Jean Egler (née Foutch), 92, of Highlands, NC passed away on September 28, 2020 at Highlands-Cashiers Hospital. She will be dearly missed by her family and friends, and remembered for her warm and joyful spirit. Dottie was kind and generous, and she spent much of her life devoted to charitable work for many organizations, including working as a church secretary and librarian, as well as becoming a hospice volunteer in retirement, together with her husband, Gene. She was always curious and finding new discoveries, taking college courses as an adult and pursuing many hobbies, as well as traveling whenever she was able. She had a keen interest in history and genealogy, traveling to many small town hall archives in the days before the internet, in order to learn more about her family tree and connections to the larger world, as well as carefully chronicling the life of her growing family. Dottie was born in Saginaw, Michigan in 1928 to Jay Bowen Foutch and Florine Adele Kurz Foutch, and was sister to Margaret, Wayne, Wendel, and Gary. Dottie attended the University of Michigan before going on to become an airline stewardess and meeting her future husband on a business flight. She wed Gene Egler, originally from Tipton, Indiana, in 1952. They were married for forty-four years until Gene’s death in 1996. Dottie was the loving mother of their children Mark, Terry, Brian, and Lesley, as well as proud grandmother of Audrey, Hadleigh, Julia, Celia, and Chloe. In the early years of their marriage, Dottie and Gene traveled to and lived in many different countries abroad, including Norway and England, as well as living in nine different states in the U.S.A., including Alaska and Maryland. Dottie helped to turn twenty-four different households into homes for the Egler family during their marriage, before finally settling down in North Carolina, where Dottie lived for the last thirty-three years, in Statesville, Winston Salem, Cary, and in Highlands, where she most recently attended Highlands United Methodist Church. Dottie’s family would like to thank the dedicated and caring staff at Chestnut Hill of Highlands, where she spent many happy years, as well as the Four Seasons hospice team and hospital staff at Highlands-Cashiers Hospital, who made her final days comfortable and peaceful. A memorial service will be planned for next spring in celebration of her life. In lieu of flowers, memorial contributions may be made to http://www.cartfund.org/cart/donations/. Moffitt Family Funeral Care is honored to serve Mrs. Egler's family. Online condolences may be made at www.moffittfamilyfuneralcare.com under the Obituaries section.

Mrs. Dorothy (&#8220;Dottie&#8221;) Jean Egler (née Foutch), 92, of Highlands, NC passed away on September 28, 2020 at Highlands-Cashiers Hospital. She will be dearly missed by her family and friends, and remembered for her warm and joyful... View Obituary & Service Information

The family of Dorothy Jean Egler created this Life Tributes page to make it easy to share your memories.