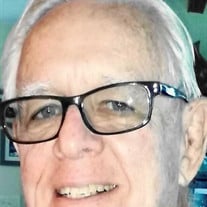 Donald Bates Miller was born October 14, 1931, in Indianapolis, Indiana, and lived until May 26, 2020. During the 88 years he was on Earth, he proved himself to be exceptional time and again. He truly lived life to the fullest. He attended Wabash College and received his Bachelor of Science from Massachusetts Institute of Technology. Later, he completed his Master of Business Administration at Stanford University. Donald was a legacy member of Beta Theta Pi fraternity. Donald worked for Proctor and Gamble as a food chemist. He was instrumental in the development of products recognized by millions including Jif Peanut Butter, Crisco Oil, and the Duncan Hines line. His daughters were his favorite “taste testers”. Added to his numerous accomplishments were his successes as a realtor, a land developer, and a restaurateur. He really was a man with many varied interests. Donald was a problem solver. His family knew, given the time, he could make absolutely anything out of PVC pipe. Radios and woodworking were also two of his hobbies. And, water! Water in any shape or size had his attention from boating to sports to fountains. His interests also included computers, his dogs, fast cars, and especially the Indianapolis 500. A pleasing part of his personality was the gentle smile that he was quick to give. He enjoyed music, especially of the 50s, but his favorite was Andre’ Rieu, a Dutch violinist and conductor. Donald’s love for his family was paramount. He was an excellent husband and father. When the grand, great-grand, and great-great grandchildren came along, his heart stretched to include them, too. Next to his love for his family was his love for his country. He served as a 1st Lieutenant in the United States Army and was a member of the American Legion. Surviving Donald are his wife of 66 years, Sally Smith Miller; his daughters, Karen Miller Stiwinter (Lavaughn) and Kimberly Miller Sherrill (Jim); his grandsons, David P. Sherrill (Carrie) and Tony Lee Stiwinter; his great-grandchildren, Tyler, Cody, and Elizabeth; and his great-great-grandson, Barrett. Donald was preceded in death by his parents, Victor F. Miller and Vera Bates Miller; a son, Donald Bates Miller, II; and a grandson, Brandon Keith Stiwinter. A private celebration will be held at a later date. In lieu of flowers, Memorial gifts may be made to: Brandon Stiwinter Memorial Scholarship C/O The North Carolina Community Foundation 3737 Glenwood Ave Unit 460 Raleigh, NC 27612 or The Alzheimer’s Association 225 N Michigan Avenue Fl 17 Chicago, IL 60601 Moffitt Family Funeral Care is honored to serve Mr. Miller’s family.

Donald Bates Miller was born October 14, 1931, in Indianapolis, Indiana, and lived until May 26, 2020. During the 88 years he was on Earth, he proved himself to be exceptional time and again. He truly lived life to the fullest. He attended... View Obituary & Service Information

The family of Donald Bates Miller created this Life Tributes page to make it easy to share your memories.