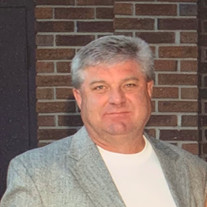 Franklin, NC: Dennis "Denny" Candler Vanhook was born on July 5, 1953. Even though he missed the big Fourth of July celebration by one day, he had it in him to celebrate daily, enjoying life to the fullest. Denny was an awesome athlete in his younger days, possessing the ability required to play higher level sports. Even though he had different plans, Denny never lost that competitive trait required in athletics. He was a lifelong sports enthusiast and found the greatest pleasure in following his grandchildren as they excelled in basketball, baseball, or volleyball. He was a diehard Carolina fan and became a Mountaineer fan, celebrating his grandson's success on the Appalachian State University baseball field. Soni, who was the love of Denny's life, always said before she fell in love with Denny, she fell in love with his parents, Bill and Isabell. Whatever the circumstances, it worked and they were married for fifty years. His parents were very important to him, and the love they instilled in him was passed on to many people. Denny enjoyed helping take care of them and was always approachable and willing to help anyone that he could. Those who knew Denny knew how much he loved Soni and and their daughter, Kim, but his grandchildren made his eyes light up like nothing else could. He just couldn't get enough of them and had the great pleasure of living close enough to get daily visits. He was devoted to each of them. When Jesus chose His disciples, seven of the twelve were fishermen. Denny, therefore, must have been one of Jesus's favorite kind of people since he'd rather be fishing than anything. He and his old friend, Sam Henderson, and others spent many days terrorizing the fish in Western North Carolina and north Georgia. No mountain stream was safe. Denny was one of those rare people who enjoyed a joke on himself. He would tell what foolish thing he'd done and get a bigger laugh than anyone. His recognizable laugh was so contagious that there was no choice but to laugh with him. Denny was a believer-a man of faith. He had a passion for doing what he could for the Baptist Men's Association, whether it was raising money or participating on mission trips. He enjoyed being with like minded believers and helping others. Denny went on to Glory on April 30, 2021, leaving his wife, Sonja Stamey Vanhook; his daughter, Kimberly Vanhook Terrell (Brian); his grandchildren, Andrew, Andrea, and Anderson; his brother, Billy Vanhook (Sherry); a sister-in-law, Becky Powers, a brother-in-law, Dennis Stamey (Terry); his nieces and nephews, Amy, Ben, Breanna, Jake, and Leah; and his special friends, Walter and Terri Hunter with many happy and funny memories. Denny was predeceased by his parents, William Henry "Bill" and Isabell Ray Vanhook. A Celebration of Life is planned for Tuesday, May 4, at 6:00 p.m., at Prentiss Church of God. Don Moffitt, Mark Bishop, and Tim Hayes will officiate. In lieu of flowers, please consider a contribution to the NC Baptist Men's Association, PO Box 1107, Cary, North Carolina 27512. Moffitt Family Funeral Care is honored to serve Denny's family.

Franklin, NC: Dennis "Denny" Candler Vanhook was born on July 5, 1953. Even though he missed the big Fourth of July celebration by one day, he had it in him to celebrate daily, enjoying life to the fullest. Denny was an awesome athlete in... View Obituary & Service Information

The family of Dennis (Denny) Candler Vanhook created this Life Tributes page to make it easy to share your memories.