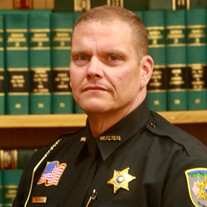 On May 23, 2020, a beautiful spring day, just perfect for enjoying a motorcycle ride, David Franklin Head, along with his wife, Dawn, tragically lost his life and entered into his heavenly home. David was joined in death by his wife, Dawn Head; and preceded by his paternal grandparents, JD and Annie Dryman Head; and his maternal grandparents, Ben and Polly Wax. David is survived by his children, Jeslyn Kate Head and John David “JD” Head; his parents, Ellis Franklin Head (Gail) and Ann Wax; his sisters, Deborah Head Holt (Steve) and Polly Deann “DeDe” Head; and his niece and nephew, Hannah Holt and Jacob Holt. David’s great love for his children, Jeslyn and “JD”, was apparent to anyone who knew David. He was their biggest fan and most ardent and loudest supporter. They were truly his pride and joy. Born on December 11, 1973, David followed in the footsteps of his Uncle Ray by serving his country in the United States Navy. He was a member of the Blue Ridge Masonic Lodge 435 Af & AM. His desire to help others and serve his fellow man resulted in a position with the Macon County Sheriff’s Department where he held the rank of Corporal. His work was very important to him, and his coworkers became like family. David enjoyed the great outdoors and all that came with it, including hunting and motorcycle riding. He loved big. He was a proud dad, a loyal friend, a genuine person, a jokester, and a storyteller. He eagerly offered a helping hand to those in need. He had a way of lighting up a room with his contagious laugh. He never left without saying “I love you” and showing that was true with one of his big hugs. A Celebration of Life will be held on Thursday, May 28, at 11:00 a.m., at the Scaly Mountain Fire Department. Reverend Oliver Rice will officiate with eulogies given by Sheriff Robert Holland, Nancy Lata, and David Sanborn. In lieu of flowers contributions may be made to: David and Dawn Head Children’s Education Fund c/o United Community Bank 257 East Main Street Franklin, NC 28734 Donations can also be made to the same account by going to the Macon County Sheriffs Facebook Page and GOFundMe link. https://www.gofundme.com/f/afz8w-david-amp-dawn-head-childr… Moffitt Family Funeral Care is honored to serve David’s family.

On May 23, 2020, a beautiful spring day, just perfect for enjoying a motorcycle ride, David Franklin Head, along with his wife, Dawn, tragically lost his life and entered into his heavenly home. David was joined in death by his wife, Dawn Head;... View Obituary & Service Information

The family of David Franklin Head created this Life Tributes page to make it easy to share your memories.