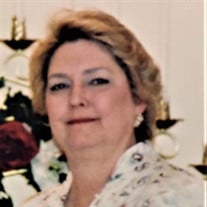 Barbara Jo Benninghoff Bryant Guy, who was born in Bainbridge, Georgia, on May 3, 1956, passed on April 22, 2020, in Franklin, North Carolina. Barbara’s father, James Vernon “Jabo” Duke, a well-known figure in Bainbridge because of his position as Chief Public Safety Director, predeceased her, but her mother, Mary Jane Skipper Duke, also of Bainbridge, survives. Barbara was also predeceased by a special grandmother, Valeria Mill-Skipper, who helped rear her, and by her sister, Debra Skipper, who shared her home in St. Augustine with Barbara for a while when Barbara was a young lady. Barbara’s other survivors include her husband, Earnest Lacy Guy; her daughter, Alexis Shapiro (Kenneth); and her brothers Bret Benninghoff (Gail) and Eric Duke (Angela). Barbara is also survived by her two precious grandchildren whom she adored to the ends of the world. In her eyes her grandchildren were the greatest gift of life and not unlike most grandmothers Barbara Jo just knew that her granchildren, Emily-Anna B. Hill and C.C. Jake Hill were beyond perfect. Barbara was a free spirit who lived life to the fullest. She saw the beauty in her surroundings and used her ability as an artist to capture it. She was intelligent, well read, and interested in many subjects. As a child of the 60s and 70s, Barbara enjoyed the music of that era, especially Barry Manilow, Queen, and the Eagles. Sewing was her hobby as well as owning many cats during her lifetime. She was, indeed, a beautiful, caring lady who was well loved. A private burial will be held in Bainbridge, Georgia, at a later date. Moffitt Family Funeral Care is honored to serve Barbara's family.

The family of Barbara Jo Bryant Guy created this Life Tributes page to make it easy to share your memories.

Barbara Jo Benninghoff Bryant Guy, who was born in Bainbridge,...