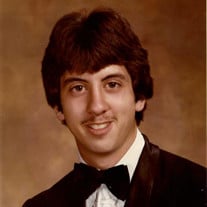 Anthony Yuzzi, Jr., was born in Broward County, Florida, on February 10, 1966, to Alice Ivers Yuzzi and Anthony Yuzzi. When he was six years old, he and his family relocated to Franklin, NC. He passed from this life on November 24, 2021. Anthony leaves many memories. One of those is how he enjoyed going to Atlanta Storage auctions to bid and be surprised as to what was inside to resale. He had grand and wonderful ideas and enjoyed finding treasures and bidding on them in auctions. Although Anthony was the owner of Asheville Honey Company, he found himself "owned" by a very spoiled chihuahua named Doggy. As a teenager Anthony was drawn to fast cars and hot rods. His love for collectible cars ended when he became interested in flying, as he was quite thrilled when he received his pilot's license. On the opposite side of his personality, however, was fishing. The challenge of mountain streams and hooking a big trout was also one of his interests. Anthony and his dad were both sports fans who watched games together on television. He was a Pittsburgh Steelers fan for many years, but got the happy occasion to meet in real life other football players. He and Steven were playing football outside the house in Riverbend when a car came down the road and turned around. It was Larry Csonka and Jim Kiick. They talked for a few minutes. During the days of church softball leagues, Anthony enjoyed being part of the team sponsored by his church, St. Francis of Assisi Catholic Church, playing alongside Father Mike and other church members. Anthony also had knack of getting people off morbid thoughts and turning them around. Anthony is survived by his mother, Alice Yuzzi; his brother, Steven Yuzzi (Lori), of Cullowhee, NC; his niece, Lauren Yuzzi; his nephew, Nick Yuzzi. Many uncles, aunts, and cousins also survive. He was predeceased by his father, Anthony Yuzzi, Sr. Funeral Mass will be held Wednesday, December 1, 2021, at 11:00 a.m., St. Francis of Assisi Catholic Church. Burial will follow at Woodlawn Cemetery. Moffitt Family Funeral Care is honored to serve Anthony's family.

Anthony Yuzzi, Jr., was born in Broward County, Florida, on February 10, 1966, to Alice Ivers Yuzzi and Anthony Yuzzi. When he was six years old, he and his family relocated to Franklin, NC. He passed from this life on November 24, 2021. Anthony... View Obituary & Service Information

The family of Anthony Yuzzi Jr. created this Life Tributes page to make it easy to share your memories.